Over Arches: Soaring Up the Three Penguins

A whimsical climbing adventure lay in store for the filmmaking team in Arches National Park, home to the world’s largest collection of natural sandstone archways. At the very entrance to the park stands a quirky stone guardian: The Three Penguins, a trio of sculpture-like 130-foot towers that sit imposingly atop a 100-foot pedestal. The view from below them can only be beaten by the view from on top: a cocktail-table-sized summit with jaw-dropping, 360-degree vistas of the entire park.

“Arches might be my favorite park of all because it’s so different from anywhere I’ve seen,” says producer Shaun MacGillivray. “It’s hard to wrap your mind around the idea that this amazing architecture is nature’s doing and something that happened over geologic time. We not only shot our characters climbing and hiking, but we also sent in time-lapse photography teams to capture the park’s shifting moods. We really wanted audiences to experience the living, breathing nature of the place.”

As soon as the filmmaking team saw the Three Penguins, the funky rock form could not be ignored. “It made so much sense to shoot there,” says Shaun. “When you step back, that rock really does kind of look like a group of penguins, but we also saw the potential for spectacular aerials.”

For cast member Rachel Pohl, the Three Penguins went right into her list of top ten experiences on the trip, for several reasons: “I’ve always been totally obsessed with penguins—in fact as a kid, I thought I’d one day become a penguin scientist,” she explains. “As far as the climbing goes, it’s super interesting because the formation is made of eroding sandstone formed by the wind and the rain but also all those who have been up it before. The weird part was climbing with a helicopter next to you! I tried not to be distracted, but it’s hard to block out a helicopter. And usually, you get the amazing feeling of reaching the summit only once on a climb but I climbed that part 12 times for the film so I had it over and over! Watching the sun rise from up there felt like something from a dream.”

Adds cast member Max Lowe: “It one of those views that is like no other—you feel like you’re peeking over the tops of all the arches. Even though we were surrounded by cameras and a helicopter, nothing could obscure the wonder.” 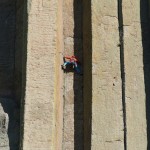