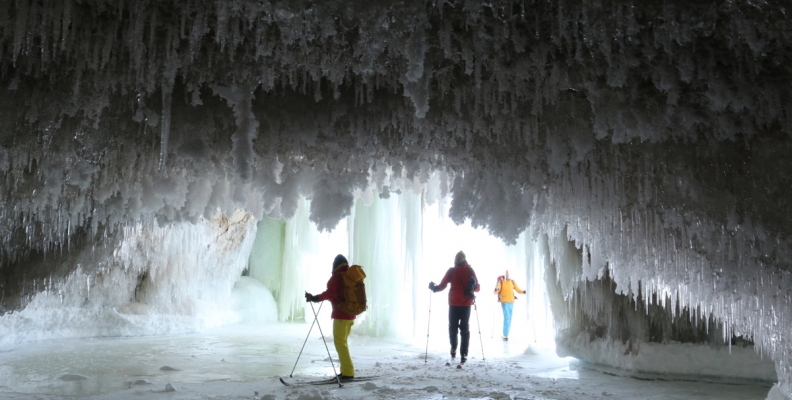 The imagery of National Parks Adventure turns to mystical enchantment in the film’s most unexpected location: the frozen wonderland of Pictured Rocks National Seashore in upper Michigan. Designated a national park site in 1966, the park is the very definition of a hidden gem, boasting sandstone cliffs, caves, natural archways and dunes that draw local visitors but are not often seen in winter, let alone on film. Indeed, the MacGillivray Freeman team only discovered it by accident.

Originally slated to shoot winter scenes in Yellowstone, the crew was thwarted when Yellowstone had a record year of paltry snowfall and warmer-than-usual temperatures. But when MacGillivray Freeman production assistant Becky Jameson brought photos of Pictured Rocks to an emergency meeting, the wintertime plan shifted. “As soon as we saw it, we jumped into action,” recalls director Greg MacGillivray.

The reality was even more breathtaking than anything they could have anticipated. Says producer Shaun MacGillivray: “We’d never seen a place that looked so much like a fantasy land—where you have caves filled with ice crystals and icy waterfalls that are so pristine. It’s a real hidden gem and it was a chance for us to explore the wild in winter. It was even a new experience for Conrad, Rachel and Max and we found the place had a tremendous emotional resonance.”

Two different sequences were shot in Pictured Rocks: an ice-climb up a frozen waterfall led by Conrad Anker and a trek into a hidden ice cave that appears like something out of a classic fairy tale.

The ice climb presented numerous challenges for the filmmakers—including just getting the equipment there. “The lake was not completely frozen so we faced having to hike equipment in and out for hours each day. But we got lucky—a cold spell hit, the lake soon froze over and suddenly we could travel by snowmobile,” Greg MacGillivray explains. “Of course, you can’t take a frozen lake for granted. You have to constantly be on the lookout for mushy spots, or you’ll start to sink!”

Then there was the fact that mechanical equipment fails at ultra-low temperatures. “The IMAX® 3D camera really doesn’t like cold,” admits Greg. “So we used electric heating pads velcroed around the camera like blankets. But even that wasn’t enough. The camera would still jam. So then we put the camera inside a special tent with a propane heater, while the rest of us froze outside. Meanwhile, we were shooting additional footage with the 2D camera. We bought the last 150 feet of Estar film stock on earth—it’s a plastic-based film that stays supple in the cold—and that saved us.”

Each shot meant hours in bone-chilling cold. At times, the crew had to haul in large fans just to keep snowflakes from hitting the camera lens. “Nothing works better in IMAX 3D than snow, but it can’t hit the lens or the shot is ruined,” explains Greg. “It was a very difficult shoot—I had numbness that lasted in my feet for 4 months after—but it was so incredible we couldn’t resist.”

Anker, Pohl and Lowe had never seen Pictured Rocks before either and loved discovering a complete unknown. “This was my first time there and it is astonishingly beautiful,” says Anker. “It offers a nice chance to show some of the beauty of the American Midwest.” Adds Pohl: “When I heard we were going to Michigan, I thought ‘where?’ But it turned out to be a big favorite.”

As the others were ice climbing, Pohl and film research director Barbara MacGillivray were hiking—and came upon a glittering ice cave that Greg calls “a pinnacle moment in the film.” Says Rachel: “What I love so much about that cave is that it is always changing so you could go back in a year and it will might look different. It’s so cool that we saw it in one indescribably beautiful moment that will never be again.”

When Greg saw the cave, he too was overcome. “It is truly magical,” he describes. “I’ve seen other ice caves but I’ve never seen icicles like this—some were mysteriously covered in powdered snow, other were so impossibly thin you couldn’t imagine how they were formed. And the only footsteps in the cave were ours, which made it even more magical. It’s one of the best 3D locations I’ve ever encountered—and later we knew we had to set that scene to Jeff Buckley’s ‘Hallelujah.’”

Over Arches: Soaring Up the Three Penguins